An Excitied Game Of Skill And Chance

Yahtzee has been one of the most popular dice games in the United States since its introduction in the 1950s. Today, over 50 million games are sold each year. The game was invented by an anonymous Canadian couple, who called it 'The Yacht Game' because they played it on their yacht with their friends. The best 'hand' in a game of Yahtzee is a five of a kind. The game is played with five dice, and if you get five dice all with the same number, then you’ve scored a 'Yahtzee'. The name of the game is also the name of the best hand. The odds of rolling a Yahtzee on your first roll are 1295 to 1, so you won’t see that happen too often–at least not on a single roll.

The fabulously famous dice game, introduced over 50 years ago, continues to delight millions!

The fabulously famous dice game, introduced over 50 years ago, continues to delight millions of players. This edition has the same styling as the original game with an aluminum-rimmed dice cup, five dice, score pad, and bonus chips. The object of the game is to score the most points by rolling five dice to make certain combinations. The dice can be rolled up to three times in a turn to try to make one of the 13 possible scoring combinations. A game consists of thirteen rounds during which the player chooses which scoring combination is to be used in that round. 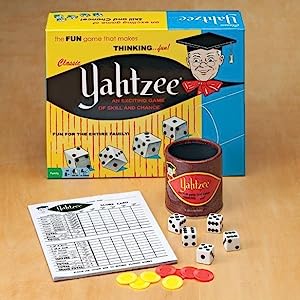 Experience Yahtzee like it was when debuted in 1956! Our Classic Yahtzee is the same styling as the original game. Bring back memories as you roll classic dice combinations like Full House, Large Straight and Yahtzee (five-of-a-kind). Our Dice cup has the aluminum rim! We also include five white dice, scorepad and eight bonus chips (four red, four yellow), a storage tray and instruction sheet. 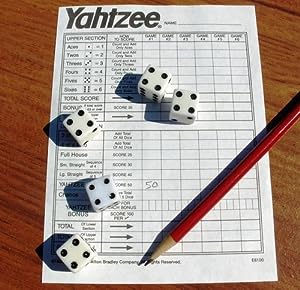 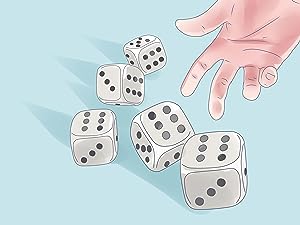 The game that makes thinking fun! Yahtzee may also be played by two or more teams of partners. Partners write their score in the same column. All other rules remain the same. The game is completed after each player has had 13 turns and has filled every box in the column with a score or an optional zero. The scores are then totaled and entered on the reverse side of the score pad. The Player or Team with the highest total score for all games (up to six) wins!